Taught for a Result or Developing a Passion

According to a story in the Australian national broadcaster, the ABC, website, Australian school children are now ranked 27th out of 48 countries in reading, according to the Progress in International Reading Literacy Study, and that a quarter of Australia’s year 4 students had failed to meet the minimum standard defined for reading at their age. As expected, the Australian government  has said “something must be done” and the Australian Federal Opposition has said “you did the wrong thing”. Ho hum. Reading the document itself is fascinating because our fourth graders apparently struggle once we move into the area of interpretation and integration of ideas and information, but do quite well on simple inference. There is a lot of scope for thought about how we are teaching, given that we appear to have a reasonably Bloom-like breakdown on the data but I’ll leave that to the (other) professionals. Another international test, the Program for International School Assessment (PISA) which is applied to 15 year olds, is something that we rank relatively highly in, which measures reading, mathematics and science. (And, for the record, we’re top 10 on the PISA rankings after a Year 4 ranking of 27th. Either someone has gone dramatically wrong in the last 7 years of Australian Education, or Year 4 results on PIRLS doesn’t have as much influence as we might have expected on the PISA).We don’t yet have the results for this but we expect it out soon. 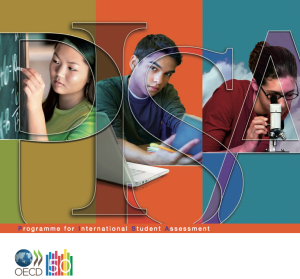 What is of greatest interest to me from the linked article on the ABC is the Oslo University professor, Svein Sjoberg, who points out the comparing educational systems around the globe is potentially too difficult to be meaningful – which is a refreshingly honest assessment in these performance-ridden and leaderboard-focused days. As he says:

“I think that is a trap. The PISA test does not address the curricular test or the syllabus that is set in each country.

Like all of these tests, PIRLS and PISA measure a student’s ability to perform on a particular test and, regrettably, we’re all pretty much aware, or should be by now, that using a test like this will give you the results that you built the test to give you. But one thing that really struck me from his analysis of the PISA was that the countries who perform better on the PISA Science ranking generally had a lower measure of interest in science. Professor Sjoberg noted that this might be because the students had been encouraged to become result-focused rather than encouraging them to develop a passion.

If Professor Sjoberg is right, then is not just a tragedy, it’s an educational catastrophe – we have now started optimising our students to do well in tests but be less likely to go and pursue the subjects in which they can get these ‘good’ marks. If this nasty little correlation holds, then will have an educational system that dominates in the performance of science in the classroom, but turns out fewer actual scientists – our assessment is no longer aligned to our desired outcomes. Of course, what it is important to remember is that the vast majority of these rankings are relative rather than absolute. We are not saying that one group is competent or incompetent, we are saying that one group can perform better or worse on a given test.

Like anything, to excel at a particular task, you need to focus on it, practise it, and (most likely) prioritise it above something else. What Professor Sjoberg’s analysis might indicate, and I realise that I am making some pretty wild conjecture on shaky evidence, is that certain schools have focused the effort on test taking, rather than actual science. (I know, I know, shock, horror) Science is not always going to fit into neat multiple choice questions or simple automatically marked answers to questions. Science is one of the areas where the viva comes into its own because we wish to explore someone’s answer to determine exactly how much they understand. The questions in PISA theoretically fall into roughly the same categories (MCQ, short answer) as the PIRLS so we would expect to see similar problems in dealing with these questions, if students were actually having a fundamental problem with the questions. But, despite this, the questions in PISA are never going to be capable of gauging the depth of scientific knowledge, the passion for science or the degree to which a student already thinks within the discipline. A bigger problem is the one which always dogs standardised testing of any sort, and that is the risk that answering the question correctly and getting the question right may actually be two different things.

Years ago, I looked at the examination for a large company’s offering in a certain area, I have no wish to get sued so I’m being deliberately vague, and it became rapidly apparent that on occasion there was a company answer that was not the same as the technically correct answer. The best way to prepare for the test was not to study the established base of the discipline but it was to read the corporate tracts and practise the skills on the approved training platforms, which often involved a non-trivial fee for training attendance. This was something that was tangential to my role and I was neither of a sufficiently impressionable age nor strongly bothered enough by it for it to affect me. Time was a factor and incorrect answers cost you marks – so I sat down and learned the ‘right way’ so that I could achieve the correct results in the right time and then go on to do the work using the actual knowledge in my head.

However, let us imagine someone who is 14 or 15 and, on doing the practice tests for ‘test X’ discovers that what is important is in hitting precisely the right answer in the shortest time – thinking about the problem in depth is not really on the table for a two-hour exam, unless it’s highly constrained and students are very well prepared. How does this hypothetical student retain respect for teachers who talk about what science is, the purity of mathematics, or the importance of scholarship, when the correct optimising behaviour is to rote-learn the right answers, or the safe and acceptable answers, and reproduce those on demand. (Looking at some of the tables in the PISA document, we see that the best performing nations in the top band of mathematical thinking are those with amazing educational systems – the desired range – and those who reputedly place great value in high power-distance classrooms with large volumes of memorisation and received wisdom – which is probably not the desired range.)

Professor Sjoberg makes an excellent point, which is that trying to work out what is in need of fixing, and what is good, about the Australian education system is not going to be solved by looking at single figure representations of our international rankings, especially when the rankings contradict each other on occasion! Not all countries are the same, pedagogically, in terms of their educational processes or their power distances, and adjacency of rank is no guarantee that the two educational systems are the same (Finland, next to Shanghai-China for instance). What is needed is reflection upon what we think constitutes a good education and then we provide meaningful local measures that allow us to work out how we are doing with our educational system. If we get the educational system right then,  if we keep a bleary eye on the tests we use, we should then test well. Optimising for the tests takes the effort off the education and puts it all onto the implementation of the test – if that is the case, then no wonder people are less interested in a career of learning the right phrase for a short answer or the correct multiple-choice answer.