← The Blame Game: Things were done, mistakes were made.
Tell us we’re dreaming. →

The Kids are Alright (within statistical error)

You may have seen this quote, often (apparently inaccurately) attributed to Socrates:

“The children now love luxury; they have bad manners, contempt for authority; they show disrespect for elders and love chatter in place of exercise. Children are now tyrants, not the servants of their households. They no longer rise when elders enter the room. They contradict their parents, chatter before company, gobble up dainties at the table, cross their legs, and tyrannize their teachers.” (roughly 400BC)

Apparently this is either a paraphrase of Aristophanes or misquoted Plato – like all things attributed to Socrates, we have to remember that we don’t have his signature to any of them. However, it doesn’t really matter if Socrates said it because not only did Hesiod say something in 700BC:

“I see no hope for the future of our people if they are dependent on frivolous youth of today, for certainly all youth are reckless beyond words… When I was young, we were taught to be discreet and respectful of elders, but the present youth are exceedingly wise [disrespectful] and impatient of restraint”

And then we have Peter the Hermit in 1274AD:

“The world is passing through troublous times. The young people of today think of nothing but themselves. They have no reverence for parents or old age. They are impatient of all restraint. They talk as if they knew everything, and what passes for wisdom with us is foolishness with them. As for the girls, they are forward, immodest and unladylike in speech, behavior and dress.”

(References via the Wikiquote page of Socrates and a linked discussion page.)

Let me summarise all of this for you:

You dang kids! Get off my lawn.

As you know, I’m a facty-analysis kind of guy so I thought that, if these wise people were correct and every generation is steadily heading towards mental incapacity and moral turpitude, we should be able to model this. (As an aside, I love the word turpitude, it sounds like the state of mind a turtle reaches after drinking mineral spirits.) 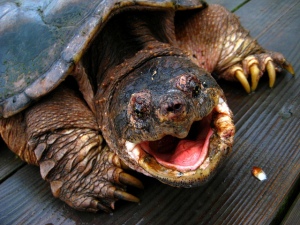 I can hear the colour blue!

So let’s do this, let’s assume that all of these people are right and that the youth are reckless, disrespectful and that this keeps happening. How do we model this?

It’s pretty obvious that the speakers in question are happy to set themselves up as people who are right, so let’s assume that a human being’s moral worth starts at 100% and that all of these people are lucky enough to hold this state. Now, since Hesiod is chronologically the first speaker, let’s assume that he is lucky enough to be actually at 100%. Now, if the kids aren’t alright, then every child born will move us away from this state. If some kids are ok, then they won’t change things. Of course, every so often we must get a good one (or Socrates’ mouthpiece and Peter the Hermit must be aliens) so there should be a case for positive improvement. But we can’t have a human who is better than 100%, work with me here, and we shall assume that at 0% we have the worst person you can think of.

What we are now modelling is a random walk, starting at 100 and then adding some combination of -1, 0 or 1 at some regular interval. Let me cut to the chase and show you what this looks like, when modelled. I’ve assumed, for ease of modelling, that we make the assessment of the children every year and we have at most a 1 percentile point shift in that year, whatever other assumptions I made. I’ve provided three different models, one where the kids are terrible – we choose very year from no change or a negative shift. The next model is that the kids have some hope but sometimes do nothing, and we choose from an improvement, no change or steady moral decline! The final model is one where we either go up or down. Let’s look at a random walk across all three models over the span of years from 700BC to today: 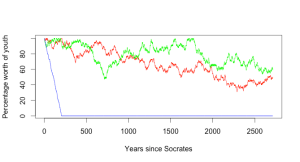 Blue is the bad children, red is the kids who sometimes do nothing and green is the good/bad.

As you can see, if we take the dire predictions of the next generation as true, then it is only a few hundred years before everything collapses. However, as expected, random walks over this range move around and hit a range of values. (Right now, you should look up Gambler’s Ruin to see why random walks are interesting – basically, over an infinite time, you’d expect to hit all of the values in the range from 0 to 100 an infinite number of times. This is why gamblers with small pots of money struggle against casinos with effectively infinite resources. Maths.)

But we know that the ‘everything is terrible’ model doesn’t work because both Socrates and Peter the Hermit consider themselves to be moral and both lived after the likely ‘decline to zero’ point shown in the blue line. But what would happen over longer timeframes? Let’s look at 20,000 and 200,000 years respectively. (These are separately executed random walks so the patterns will be different in each graph.) 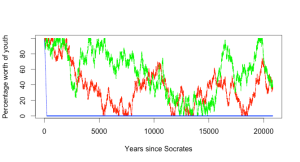 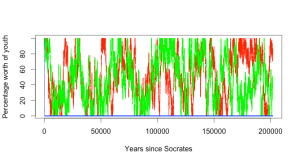 What should be apparent, even with this rather pedantic exploration of what was never supposed to be modelled is that, even if we give credence to these particular commentators and we accept that there is some actual change that is measurable and shows an improvement or decline between generations, the negative model doesn’t work. The longer we run this, the more it will look like the noise that it is – and that is assuming that these people were right in the first place.

Personally, I think that the kids of this generation are pretty much the same as the one before, with some different adaptation to technology and societal mores. Would I have wasted time in lectures Facebooking if I had the chance? Well, I wasted it doing everything else so, yes, probably. (Look around your next staff meeting to see how many people are checking their mail. This is a technological shift driven by capability, not a sign of accelerating attention deficit.) Would I have spent tons of times playing games? Would I? I did! They were just board, role-playing and simpler computer games. The kids are alright and you can see that from the graphs – within statistical error.

Every time someone tells me that things are different, but it’s because the students are not of the same calibre as the ones before… well, I look at these quotes over the past 2,500 and I wonder.

And I try to stay off their lawn.

3 Comments on “The Kids are Alright (within statistical error)”