Legitimisation and Agency: I Believe That’s My Ox on Your Bridge

There’s an infamous newspaper advertisement that never ran, which reflected the entry of IBM into the minicomputer market. A number of companies, Data General principal among them, but including such (historically) powerful players as Digital Equipment Corporation, Prime and Hewlett Packard, were quite successful in the minicomputer market, growing rapidly and stealing market share from IBM’s mainframe market. (For an excellent account of these times, I recommend “The Soul of a New Machine” by Tracy Kidder.) IBM finally decided to enter the minicomputer market and, as analysts remarked at the time, IBM’s move into minicomputers legitimised the market.

Ed DeCastro, CEO of Data General, had a full-page news paper advertisement prepared, which I reproduce (mildly bowdlerised to keep my all ages posting status):

“They Say IBM’s Entry Into the Minicomputer Market Will Legitimize the Industry. The B***ards Say, Welcome.”

The ad never actually ran but was framed and put on Ed’s wall. The point, however, was well and precisely made: IBM’s approval was neither required nor desired, and nobody had set a goal of being legitimised. 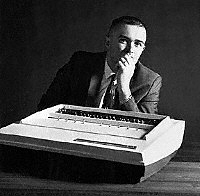 The Nova, the first Data General minicomputer, with Ed DeCastro in the background.

Over on Mark’s blog, we see that a large number of UK universities are banding together to launch an on-line project, including the highly successful existing player in the analogous space, the Open University, but also some high power players such as Southampton and the disturbingly successful St Andrews. As Mark notes in the title, this is a serious change in terms of allying a UK effort that will produce a competitor (or competitors) to the existing US dominance. As Mark also notes:

Hmm — OxBridge isn’t throwing hats into the rings yet.

And this is a very thoughtful Hmm, because the Universities of Oxford and Cambridge are the impossible-to-ignore legitimising agencies because of their sheer weight on the rubber sheet of UK Academy Spacetime. When it comes to talking about groups of Universities in the UK, and believe me there are quite a few, the Russell Group awards the lion’s share of PhDs, with 78% of the most highly graded research staff as well, across the 24 Universities. One of its stated goals is to lead the research efforts of the UK, with another being to attract the best staff and students to its member institutions. However, the group of participants in the new on-line project involve Russell Group Universities and those outside, which makes the non-participation of Oxford and Cambridge even more interesting. How can a trans-group on-line proposal bring the best students in – or is this why we aren’t seeing involvement from Oxbridge, because of the two-tier perception between traditional and on-line? One can easily argue that Oxford and Cambridge have no need to participate because they are so entrenched in their roles and their success that, as I’ve noted on a different post, any ranking system that rates them out of, say, the top 5 in the UK has made itself suspect as a ranking, rather than a reflection of dropping quality. Oxbridge is at the heart of the UK’s tertiary system and competition will continue to be fierce to gain entry for the foreseeable future. They have no need to get together with the others in their group or beyond, although it’s not from protecting themselves from competitors, as they are not really in competition with most of the other Russell Group members – because they are Oxford and Cambridge.

It’s worth noting that Cambridge’s vice-chancellor Leszek Borysiewicz did think that this consortium was exciting, and I quote from the THE article:

“Online education is becoming an important approach which may open substantial opportunities to those without access to conventional universities,” he said.

And that pretty much confirms why Cambridge is happy to stand back – because they are almost the definition of a conventional university, catering to a well-established market for whom attending a bricks-and-mortar University is as (if not more) important than the course content or delivery mechanisms. The “Gentleman’s Third”, receiving the lowest possible passing grade for your degree examinations, indicates a dedication to many things at the University that are, most likely, of a less-than-scholarly nature but it is precisely for these activities that some people go to Oxford and Cambridge and it is also precisely these non-scholarly activities that we will have great difficulty transferring into a MOOC. There will be no Oxford-Cambridge boat race carried out on a browser-based Flash game, with distributed participants hooked up to rowing machines across the globe, nor will the Footlights be conducted as a Google Hangout (except, of course, highly ironically).

Over time, we’ll find out more about the role of tradition and convention in the composition and participation, but let me return to my opening anecdote. We are already dealing with issues of legitimacy in the on-line learning space, whether from pedagogical fatigue, academic cultural inertia, xenophobia, or the fact that some highly vaunted previous efforts have not been very good. The absence of two of the top three Universities in the UK in this fascinating and potentially quite fruitful collaboration makes me think a lot about IBM. I think of someone sitting back, watching things happen, certain in the knowledge that what they do is what the market needs and it is, oh happy day, what they are currently doing. When Oxford and Cambridge come in and anoint the MOOC, if they every do or if we ever can, then we have the same antique avuncular approach to patting an entire sector on the head and saying “oh, well done, but the grownups are here now”, and this is unlikely to result in anything good in terms of fellow feeling or transferability and accreditation of students, key challenges in MOOCs being taken more seriously. Right now, Oxford and Cambridge are choosing not to step in, and there is no doubt that they will continue to be excellent Universities for their traditional attendees – but is this a sensible long term survival strategy? Could they be contributing to the exploration of the space in a productive manner by putting their legitimising weight in sooner rather than later, at a time when they are saying “Let’s all look at this to see if it’s any good”, rather than going “Oh, hell. Now we have to do something”? Would there be much greater benefit in bringing in their considerable expertise, teaching and research excellence, and resources now, when there is so much room for ground level innovation?

This is certainly something I’m fearful of in my own system, where the Group of 8 Universities has most of the research funding, most of the higher degree granting and, as a goal at least, targets the best staff and students. Our size and tradition can be barriers to agility and innovation, although our recent strategy is obviously trying to set our University on a more innovative and more agile course. A number of recent local projects are embracing the legitimacy of new learning and teaching approaches. It is, however, very important to remember the example of IBM and how the holders of tradition may not necessarily be welcomed as a legitimising influence when other have been highly successful innovating in a new space, which the tradition holder has deemed beneath them until reality finally intruded.

It’s easy to stand back and say “Well, that’s fine for people who can’t afford mainframes” but such a stance must be balanced with looking to see whether people still need or want to afford mainframes. I think the future of education is heavily blended – MOOC + face-to-face is somewhere where I think we can do great things – but for now it’s very interesting to see how we develop as we start to take more and more steps down this path.

One Comment on “Legitimisation and Agency: I Believe That’s My Ox on Your Bridge”