Oh, Perry. (Our Representation of Intellectual Development, Holds On, Holds on.)

I’ve spent the weekend working on papers, strategy documents, promotion stuff and trying to deal with the knowledge that we’ve had some major success in one of our research contracts – which means we have to employ something like four staff in the next few months to do all of the work. Interesting times.

One of the things I love about working on papers is that I really get a chance to read other papers and books and digest what people are trying to say. It would be fantastic if I could do this all the time but I’m usually too busy to tear things apart unless I’m on sabbatical or reading into a new area for a research focus or paper. We do a lot of reading – it’s nice to have a focus for it that temporarily trumps other more mundane matters like converting PowerPoint slides.

It’s one thing to say “Students want you to give them answers”, it’s something else to say “Students want an authority figure to identify knowledge for them and tell them which parts are right or wrong because they’re dualists – they tend to think in these terms unless we extend them or provide a pathway for intellectual development (see Perry 70).” One of these statements identifies the problem, the other identifies the reason behind it and gives you a pathway. Let’s go into Perry’s classification because, for me, one of the big benefits of knowing about this is that it stops you thinking that people are stupid because they want a right/wrong answer – that’s just the way that they think and it is potentially possible to change this mechanism or help people to change it for themselves. I’m staying at the very high level here – Perry has 9 stages and I’m giving you the broad categories. If it interests you, please look it up! 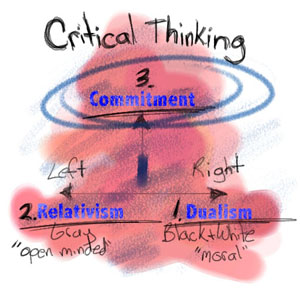 We start with dualism – the idea that there are right/wrong answers, known to an authority. In basic duality, the idea is that all problems can be solved and hence the student’s task is to find the right authority and learn the right answer. In full dualism, there may be right solutions but teachers may be in contention over this – so a student has to learn the right solution and tune out the others.

If this sounds familiar, in political discourse and a lot of questionable scientific debate, that’s because it is. A large amount of scientific confusion is being caused by people who are functioning as dualists. That’s why ‘it depends’ or ‘with qualification’ doesn’t work on these people – there is no right answer and fixed authority. Most of the time, you can be dismissed as having an incorrect view, hence tuned out.

As people progress intellectually, under direction or through exposure (or both), they can move to multiplicity. We accept that there can be conflicting answers, and that there may be no true authority, hence our interpretation starts to become important. At this stage, we begin to accept that there may be problems for which no solutions exist – we move into a more active role as knowledge seekers rather than knowledge receivers.

Then, we move into relativism, where we have to support our solutions with reasons that may be contextually dependant. Now we accept that viewpoint and context may make which solution is better a mutable idea. By the end of this category, students should be able to understand the importance of making choices and also sticking by a choice that they’ve made, despite opposition.

This leads us into the final stage: commitment, where students become responsible for the implications of their decisions and, ultimately, realise that every decision that they make, every choice that they are involved in, has effects that will continue over time, changing and developing.

I don’t want to harp on this too much but this indicates one of the clearest divides between people: those who repeat the words of an authority, while accepting no responsibility or ownership, hence can change allegiance instantly; and those who have thought about everything and have committed to a stand, knowing the impact of it. If you don’t understand that you are functioning at very different levels, you may think that the other person is (a) talking down to you or (b) arguing with you under the same expectation of personal responsibility.

Interesting way to think about some of the intractable arguments we’re having at the moment, isn’t it?

One Comment on “Oh, Perry. (Our Representation of Intellectual Development, Holds On, Holds on.)”