By George, I Think She’s Got I… No, She Hasn’t: Threshold Concepts and Oscillation

“Eliza, where the devil are my slippers?” marks the end of the musical “My Fair Lady” and, in many ways, sets the stage for a new set of developments in the life of the former-flowergirl Eliza Doolittle and the curmudgeonly and misogynistic Henry Higgins. (A far more romantic end in many ways than the original Shaw but, as one the producers noted, the public were happier with the upbeat ending. In fact, one of the producers observed to Shaw that “Your ending is damnable; you ought to be shot.” O tempora, o mores!) Much of this play/film, about the re-education of a Cockney flower girl into the speech patterns and behaviours of the wealthy English upper class, focused on Eliza’s transition and her ability to apply all of the knowledge that Higgins and Pickering sought to impart. Eliza, for dramatic value, had grand successes and major set-backs. Having mastered some fundamental phonemes, her exuberant nature was her undoing at the racetrack. Convinced that she had now absorbed the speech patterns so well that Cockney was now behind her, the entrance of her father immediately undid everything and brought her back to her birth speech. 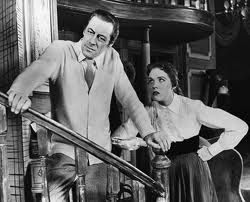 Rex Harrison and Julie Andrews from the Broadway production. The film version featured Audrey Hepburn as the studio wanted a ‘name’. Not only did Hepburn have to be dubbed for singing but Julie Andrews went on to take the Oscar for Mary Poppins in the same year. Ouch.

This is a play, so let’s not read too much into the educational presentation, but as an introduction to the phenomenon of oscillation, it’s quite a nice one. Threshold concept theory holds that there are certain concepts in every area of knowledge that are fundamentally challenging to the learner. These concepts are alien or counter-intutitive, they link together a great many concepts from within the area or subarea, but upon reaching a level of understanding of the concept, it transforms the way that we think from that time on. These threshold concepts mark a boundary between areas and ways of thinking: truly mastering a threshold concept will open up new vistas and change forever how we regard that area of knowledge. The problem is that the progress that a learner makes towards mastering the threshold concept is not guaranteed to be a smooth path: this is a road towards a challenge and it is often a hard road to travel. When a learner starts trying to master the new concept, they enter what is referred to as the liminal state and it is during this state that they can experience oscillation and risk developing fragile knowledge.

Oscillation is the movement backwards and forwards in terms of developing and understanding components of the concept, and is frustrating to both learner and educator as the learner appears to be ‘getting it’ then moves backwards. An obvious misinterpretation of this is that the learner has “stopped trying” or is either “’lazy” or “stupid”, when in fact this reflects the intrinsic cognitive difficulty in the underlying concept. Fragile knowledge is where the learner has some notions of how to solve problems but cannot construct a clean solution, which may allow excellent participation in certain activities and assessments but not others. Along with these, it’s important to remember that  sometimes learners will resort to mimicry: turning around what the learner has already seen and presenting it back to us, again giving a false impression of understanding.

We have, I suspect, all faced the student who appears to have (after much effort) achieved the understanding that we both sought and, as we probe their knowledge, we only see confirmation of mastery until, oh no, suddenly it all falls apart and we realise that what we were seeing was built upon fragile knowledge and couldn’t really function as a foundation for all of the concepts, or that we had unwittingly provided an environment where the student could parrot our own wisdom back to us and give us the impression of understanding. We must, however, remember how frustrating it must be for the student to suddenly discover that all of the progress that they thought they had made was not actually sustainable or all that solid. Taking an accusatory or judgemental stance at this point is really not going to help anyone but, if we accept that threshold concepts exist and provide this level of challenge, we have a way to think about these kinds of setbacks that say “We’re in the liminal state. This is just what happens.”

One of the reasons that I think threshold concept theory resonates with me so deeply is that gives me a basis for a quiet stoicism in the face of these kinds of setbacks. You probably shouldn’t set out on a cross-country trip and expect to see no red lights or roadworks, or to never get lost taking a turn off to go and buy lunch, because you will be deeply unhappy and frustrated by the first reversal of fortune. You also would not build in enough time to reach your destination! (One time I was driving about 6 hours across the US to see my family and the GPS took me the ‘fast’ way, which turned out to be DC to the Tennessee/VA border via West Virginia. Fortunately my family love me, so showing up 30 minutes late wasn’t a big deal, but the fault was mine because I had not allowed enough time to handle 30-60 minutes of delay, and that’s pretty much the amount of delay I get over time on that trip.) Sometimes things will take longer because these concepts are hard to grasp and we are on uncertain ground. This isn’t about learning 2×2, 2×3 and so on, this is going to transform the way that someone thinks. That makes it important.

These ideas have huge implications on everything we do with students that have deadlines or any form of time restriction. If these concepts are so counter-intutitive and challenging, then we would expect to see variation in how quickly people pick things up. Maybe that one-hour lecture slot isn’t enough? This is where the new materials and media that we have really start to look useful. Suddenly, your lecture recordings give people the chance to think and digest, rolling forwards and backwards to get a really good grip. Scaffolded on-line materials, with increasing conceptual difficulty that allows the student to stage their self-testing and establish that they are thinking along the right lines, become much more important and are worth a lot more invested time.

4 Comments on “By George, I Think She’s Got I… No, She Hasn’t: Threshold Concepts and Oscillation”