← The Big Picture and the Drug of Easy Understanding: Part II (Eclectic Boogaloo)
And let’s try that again – Katrina’s Blog →

The Big Picture and the Drug of Easy Understanding: Part I

There is a tendency to frame artistic works such as films and books inside a larger frame. It’s hard to find a fantasy novel that isn’t “Book 1 of the Mallomarion Epistemology Cycle” or a certain type of mainstream film that doesn’t relate to a previous film (as II, III or higher) or as a re-interpretation of a film in the face of another canon (the re-re-reboot cycle). There are still independent artistic endeavours within this, certainly, but there is also a strong temptation to assess something’s critical success and then go on to make another version of it, in an attempt to make more money. Some things were always multi-part entities in the planning and early stages (such as the Lord of the Rings books and hence movies), some had multiplicity thrust upon them after unlikely success (yes, Star Wars, I’m looking at you, although you are strangely similar to Hidden Fortress so you aren’t even the start point of the cycle).

From a commercial viewpoint, selling something that only sells itself is nowhere near as interesting as selling something that draws you into a consumption cycle. This does, however, have a nasty habit of affecting the underlying works. You only have to look at the relative length of the Harry Potter books, and the quality of editing contained within, to realise that Rowling reached a point where people stopped cutting her books down – even if that led to chapters of aimless meandering in a tent in later books. Books one to three are, to me, far, far better than the later ones, where commercial influence, the desire to have a blockbuster and the pressure of producing works that would continue to bring in more consumers and potentially transfer better to the screen made some (at least for me) detrimental changes to the work.

This is the lure of the Big Picture – that we can place everything inside a grand plan, a scheme laid out from the beginning, and it will validate everything that has gone before, while including everything that is yet to come. Thus, all answers will be given, our confusion will turn to understanding and we will get that nice warm feeling from wrapping everything up. In many respects, however, the number of things that are actually developed within a frame like this, and remain consistent, is very small. Stephen King experimented with serial writing (short instalments released regularly) for a while, including the original version of “The Green Mile”. He is a very talented and experienced writer and he still found that he had made some errors in already published instalments that he had to either ignore or correct in later instalments. Although he had a clear plan for the work, he introduced errors to public view and he discovered them in later full fleshings of the writing. He makes a note in the book of the Green Mile that one of the most obvious, to him, was having someone scratch their nose with their hand while in a straitjacket. Not having all of the work to look at leaves you open to these kinds of errors, even where you do have a plan, unless you have implemented everything fully before you deploy it.

So it’s no surprise that we’re utterly confused by the prequels to Star Wars, because (despite Lucas’ protestations), it is obvious that there was not even a detailed sketch of what would happen. The same can be said of the series “Lost” where any consistency that was able to be salvaged from it was a happy accident, as the writers had no idea what half of the early things actually were – it just seemed cool. And, as far as I’m concerned, there is no movie called Highlander 2. 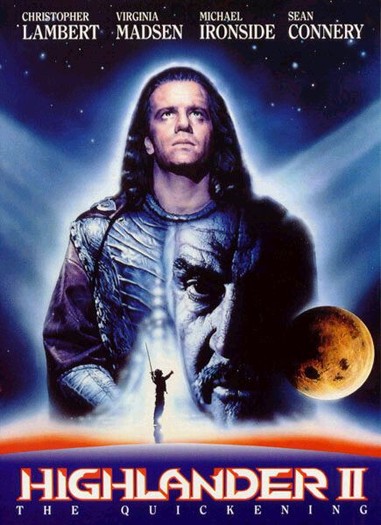 Seriously, this is just someone attempting Photoshop. Anything else is untrue.

(I should note that this post is Part 1 of 2, but I am writing both parts side by side, to try and prevent myself from depending in Part 2 upon something that I got wrong in Part 1.)

To take this into an educational space, it is tempting to try and construct learning from a sequence of high-reward moments of understanding. Our students are both delighted and delightful when they “get” something – it’s a joy to behold and one of the great rewards of the teacher. But, much like watching TED talks every day won’t turn you into a genius, it is the total construction of the learning experience that provides something that is consistent throughout and does not have to endure any unexpected reversals or contradictions later on. We don’t have a commercial focus here to hook the students. Instead, we want to keep them going throughout the necessary, but occasionally less exciting, foundation work that will build them up to the point where they are ready to go, in Martin Gardner’s words, “A-ha!”

My problem arises if I teach something that, when I develop a later part of the course, turns out to not provide a complete basis, reinterprets the work in a way that doesn’t support a later point or places an emphasis upon the wrong aspect. Perhaps we are just making the students look at the wrong thing, only to realise later that had we looked at the details, rather than our overall plan, we would have noticed this error. But, now, it is too late and the wrong message is out there.

This is one of the problems of gamification, as I’ve referred to previously, in that we focus on the drug of understanding as a fiero (fierce joy) moment to the exclusion of the actual education experience that the game and reward elements should be reinforcing. This is one of the problems of stating that something is within a structure when it isn’t: any coincidence of aims or correlation of activities is a happy accident, serendipity rather than strategy.

In tomorrow’s post, I’ll discuss some more aspects of this and the implications that I believe it has for all of us as educators.