← The Invisible War – How Do You Find What You Don’t Know You’re Missing?
Student Reflections – The End of Semester Process Report →

You’re Welcome On My Lawn But Leaf Blowers Are Not

I was looking at a piece of software the other day and, despite it being a well-used and large-userbase piece of code, I was musing that I had never found it be particularly fit for purpose. (No, I won’t tell you what it is – I’m allergic to defamation suits.) However, my real objections to it, in simple terms, sound a bit trivial to my own ears and I’ve never really had the words or metaphors to describe it to other people.

My wife and I were walking in to work today and saw, in the distance, a haze of yellow dust, rising up in front of three men who were walking towards us, line abreast, as a street sweeping unit slowly accompanied them along the road. Each of the men had a leaf blower that they were swinging around, kicking up all of the Plain Tree pollen/dust (which is highly irritating) and pushing it towards us in a cloud. They did stop when they saw us coming but, given how much dust was in the air, it’s 8 hours later and I’m still getting grit out of my eyes. 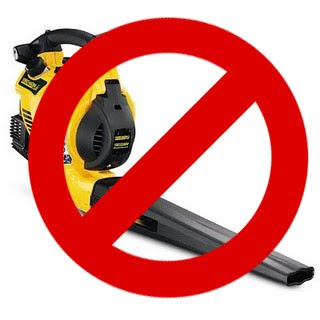 Now, I have no problem with streets being kept clean and free of debris and I have a lot of respect for the sweepers, cleaners and garbage removal people who stop us from dying in a MegaCholera outbreak from living in cities – but I really don’t like leaf blowers. On reflection, there are a number of things that I don’t like for similar reasons so let me refer back to the piece of software I was complaining about and call it a leaf blower.

Why? Well, primarily, it’s because leaf blowers are a noisy and inefficient way to not actually solve the problem. Leaf blowers move the problem to someone else. Leaf blowers are the socially acceptable face of picking up a bag of garbage and throwing it on your neighbour’s front porch. Today was a great example – all of the dust and street debris was being blown out of the city towards the Park lands where, presumably, this would become someone else’s problem. The fact that a public thoroughfare was a pollen-ridden nightmare for 30 minutes or so was also, apparently, collateral damage.

Now, of course, there are people who use leaf blowers to push leaves into big piles that they then pick up, but there are leaf vacuums and brooms and things like that which will do a more effective job with either less noise or more efficiently. (And a lot of people just blow it off their property as if it will magically disappear.) The catch is, of course, better solutions generally require more effort.

The problem with a broom is that pushing a broom is a laborious and tiring task, and it’s quite reasonable for large-scale tasks like this that we have mechanical alternatives. For brief tidy up and small spaces, however, the broom is king. The problem with the leaf vacuum is that it has to be emptied and they are, because of their size and nature, often more expensive than the leaf blower. You probably couldn’t afford to have as many of these on your cleanup crew’s equipment roster. So brooms are cheap but hard manual labour compared to expensive leaf vacuums which fulfil the social contract but require regular emptying.

Enter the leaf blower – low effort, relatively low cost, no need to empty the bag, just blow it off the property. It is, however, an easy way to not actually solve the problem.

And this, funnily enough, describes the software that I didn’t like (and many other things in a similar vein). Cost-wise it’s a sensible decision, compared to building it yourself and in terms of maintenance. It’s pretty easy to use. There’s no need to worry about being sensible or parsimonious with resources. You just do stuff in it with a small amount of time and you’re done.

The only problem is that what you are encouraged to produce by default, the affordance of the software, is not actually the solution to the problem the the software theoretically solves. It is an approximation to the answer but, in effect, you’ve handed the real problem to someone else – in my case, the student, because it’s software of an educational nature. This then feeds load straight back to you, your teaching assistants and support staff. Any effort you’ve expended is wasted and you didn’t even solve the problem.

I’ve talked before about trying to assess what knowledge workers are doing, rather than concentrating on the number of hours that they are spending at their desk, and the ‘desk hours’ metric is yet another example of leaf blowing. Cheap and easy metric, neither effective nor useful, and realistically any sensible interpretation requires you to go back and work out what people are actually doing during those hours – problem not solved, just shunted along, with a bit of wasted effort and a false sense of achievement.

Solving problems is sometimes difficult and it regularly requires careful thought and effort. There may be a cost involved. If we try to come up with something that looks like a solution, but all it does is blow the leaves around, then we probably haven’t actually solved anything.