← Exploring beauty and aesthetics
A Year of Beauty →

Beauty from the ages 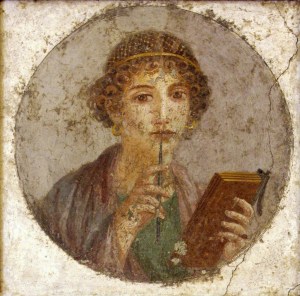 Captured from Pompeii. The elusive moment of thought before writing.

In focusing on beauty, I spoke about moving away from authority and I then, rather swiftly, mentioned a lot of importantly famous dead people who had said a lot of (what could be interpreted as) portentous things. Wait – am I making an argument to authority to support me as an authority? Let me explain and, at the same time, discuss why I can refer to some aspects of an ancient writer, while neatly skirting some of (usually) his less progressive ideas.

When we look in details at the writings on Quintilian, he is so heavily focused in his time that the thought of a tutor who wasn’t male is incomprehensible. Marcus Aurelius is very, forgive me, old-fashioned in some of his thinking on a number of issues. For both of these authors, progressive and visionary thinking is interspersed with older ideas. How do I separate one from another, especially where we are trying to step away from the sheer weight of authority?

The issue, for me, is what do we keep seeing in the literature over the years. What I am trying to point out are those sentiments that are repeated as things we could fix in education, whatever the context or experience of the writer. When we see the same problem repeated over time, we can start to believe that there is a problem that has not yet been addressed. Or, even, one that has not been perceived to have been fixed.

We don’t have to step back to the time before universal suffrage to agree with Quintillian on the potential of people. We can see this theme repeated: Rousseau, Hegel, Dewey and so on. This is a significant change of perspective. Instead of listening to one opinion, we listen for echoes and repetition where it indicates ongoing problems.

Much as we attach more weight to events that reach statistical validity through repetition and predictability, we can move beyond the sayings of famous people and identify the similarities of the saying.

By thinking this way, and by looking across thousands of years of human thought, we can consistently extract important lessons from the ages while winnowing out the temporally contextual chaff that we have left behind. We can identify aesthetics. We can seek beauty.