← Large Scale Authenticity: What I Learned About MOOCs from Reality Television
Why “#thedress” is the perfect perception tester. →

Teleportation and the Student: Impossibility As A Lesson Plan 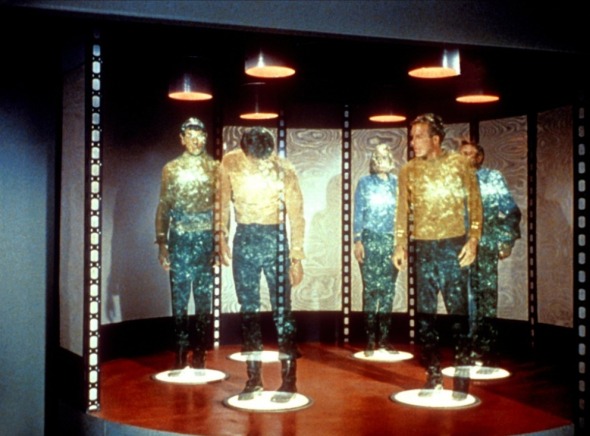 Tricking a crew-mate into looking at their shoe during a transport was a common prank in the 23rd Century.

Teleporters, in one form or another, have been around in Science Fiction for a while now. Most people’s introduction was probably via one of the Star Treks (the transporter) which is amusing, as it was a cost-cutting mechanism to make it easy to get from one point in the script to another. Is teleportation actually possible at the human scale? Sadly, the answer is probably not although we can do some cool stuff at the very, very small scale. (You can read about the issues in teleportation here and here, an actual USAF study.) But just because something isn’t possible doesn’t mean that we can’t get some interesting use out of it. I’m going to talk through several ways that I could use teleportation to drive discussion and understanding in a computing course but a lot of this can be used in lots of places. I’ve taken a lot of shortcuts here and used some very high level analogies – but you get the idea.

There are many excellent Science Fiction works referenced in the early links and many more out there, although people are backing away from it in harder SF because it does appear to be basically impossible. But if a networking student could understand all of the issues that I’ve raised here and discuss solutions in detail, they’d basically have passed my course. And all by discussing an impossible thing.

With thanks to Sean Williams, Adelaide author, who has been discussing this a lot as he writes about teleportation from the SF perspective and inspired this post.