Or, the alternative title, “The Play Formerly Known as Hamlet”. Today had a lot of fascination discussion where the bipartite nature of our class network became apparent, in terms of the the majority of the class who were Digital Humanists and really understood a detailed close reading of Hamlet – and your humble narrator.

Today we talked about modularity, which allows you to break your network up into separate modules, which makes a lot more sense when you call those modules things like communities, groups or clusters. Can your network be split up into areas where some groups are more connected to each other than they are to adjacent nodes? By doing this, we are trying to expose structural features of the network and, in particular, unexpected aspects of network structure – is there some set of nodes that have a role in the network that we don’t understand? If we talk about this in terms of people, if our social network is made up of small communities with connections between the communities, then we would expect gossip to spread more rapidly inside a community than between the communities. Simple, eh? The approach we take depends upon comparing the structure we have with a model of a random network using the same number of links.

Once we’ve done this, we can use this in a tool, such as Gephi, to clearly illustrate the groups. Here’s a grumpy Dane in illustration.

Hamlet and the various posses of Hamlet. Note the Insane Clown Posse.

I’ve coloured and tagged the network to show the key players in Hamlet, based on Moretti’s analysis of Hamlet, which attached unweighted connections between participants who had direct conversations. Now, we’ve made the size of the nodes reflect how relatively important (in terms of betweenness, the number of paths that must go through this person). If we did this in terms of PageRank, another measure of the relative importance of nodes, based on their connectivity, the nodes in green would jump up in size. But what you should note is that Hamlet and Horatio are roughly the same size and, while Hamlet is much more connected to everyone (quelle surprise, given the play’s named after him), the only thing that we lose if Hamlet disappears is that we no longer can hear from the Insane Clown Posse, Lucianus and the Lord. In purely connected terms he doesn’t appear to be that important. We’d obviously lose a lot of the text if he disappeared but how important is Hamlet in Hamlet?

This led to a lot of discussion in class as to the validity of the original Moretti pamphlet, much of which is core to the entire discussion of Digital Humanities. How valid is any conclusion from a network model such as this when the innate nature of the capture process (to provide the capta) may completely remove the ability to draw certain conclusions? The class discussed the impact on perceived and invisible observers, who strictly don’t have dialogue with each other but potentially have an impact upon other characters and their narrative interactions. (The Moretti pamphlet may be found here.) Moretti had a lot to say about Horatio as a proxy for the state and was very interested in the closeness of Hamlet to everyone else, but (later on) we ran some random network experiments and it turned out to be the type of connections in the network (the clustering coefficient) that was more interesting than the closeness.

We then moved on to a discussion of a number of useful metric for networks, including the clustering effects that tend to  indicate intention in the system we’re studying (there’s no real reason for a random network to form a small number of unique clusters unless you tune for it.) We also discussed the Small Worlds of Watts and Strogatz (1998) where you have cliques of nodes (tightly connected clusters) linked together by a smaller number of links, characterised by a power law distribution and a higher clustering coefficient (very basically).

We generated some random graphs to see if we got the structure we saw in Hamlet as noted earlier. Why? Because looking at Hamlet and drawing out information from the structure only has validity if (1) the model is accurate and (2) the situation couldn’t have easily arisen by chance. As noted, we generated a random graph for the same number of nodes and it had a similar average path length and identical diameter – but very different clustering coefficients! So it turns out that Hamlet wasn’t written by a monkey after all. 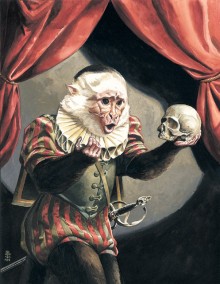 Don’t laugh, this is Darwin’s skull!

The final part of the session was on dynamic networks. This is the study of networks that change over time and we worked with some data that showed people’s association with an area over time. We could look at this in terms of change in time or in terms of progress through a corpus (chapters are as useful as dates here). What you want is a start date and an end date for the feautres in your network – when should the feature be there and when should it not be there anymore? It turns out that Gephi is quite convenient here, because you can merge a start and end time and end up with a time interval. Not bad, Gephi, not bad. Now we can see when things are active – great if you’re looking to see when students are active in forums or activities, for example. Here’s an example of the difference in the test network between the first and second halves of 2009, with all nodes of zero degree (nodes with no links) removed.

We then played around a lot with a vide variety of animations over time, including ongoing calculations, colour and shape alterations. Basically, it was rather hallucinatory by the end but that may be the Dr Pepper talking. We even got to see the sparklines (Zelchenko/Tufte) for some extra visualisation goodness!

This is one of those classic separations between the things we visualise for ourselves to help us to work out what’s interesting about a dataset and what we would visualise for presentation, especially to non-discipline people. There’s a really big difference between what scientists want to see and what other people want to see – and if we don’t realise that, then we risk either having presentations that don’t communicate enough information or we kill people with minutiae. Look at this – how useful is it for you?

Another good day but I think there are some very full brains!