← Data Visualisation: Strong Messages Educate Better
What if we are wrong? Musings on the way home →

The Invisible Fragility of our World of Knowledge

If I were to mention that I was currently researching Rongorongo, as background for a story in which the protagonists communicated in a range of reverse boustrophedonic texts, there are three likely outcomes.

What I am fairly sure that most of you will not do, is to go and look up the information in a book, go to a library or even ask another human. (Some of you will have used physical means such as books or libraries because you are being deliberate physical users. I am after the usage patterns that your adopt unconsciously, or as a matter of actual habit, then those that are employed because of a deliberate endeavour to use another source.) There is no doubt that we live in an amazing world of immediately available information and that it has changed the way that we use, store and retrieve information but this immediacy has come at a cost: we tend not to use or consult physical media as much. As a result, there is less of the physical to hand, most of the time. I have noticed a major change in the way that I use information and, while I tend to read and annotate material on printed paper (using a fountain paper, no less, so I am not judging anyone for their affectations), I search and edit in the digital form. Why? Each form has its own efficiencies. 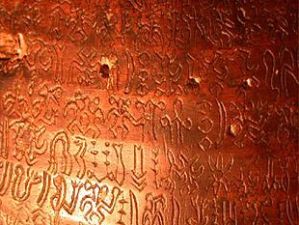 A physical artefact that we can no longer read.

The absence of the physical artefact is often not noticeable unless we are cut off from the Internet or from our stored versions of the material. Last week, my laptop decided that it would no longer boot and I realised, with mounting horror, that my only copies of certain works in progress were sitting on this ‘dead’ machine. Why weren’t they backed up? Because I was not connected to the Internet for a few hours and I had left my actual backup device at home, to reduce the risk of losing both laptop and backup in the same localised catastrophe.

The majority of the on-line information repositories are remarkable in their ease of use and sheer utility – as long as you can connect to them .We, however, have an illusion of availability and cohesion that is deceptive and it is the comfortable analogue of the printed page that lulls us into this. Wikipedia, for example, presents a single page full of text, just like a book does. It is only when you look at the History and the Discussion that it dawns on you that each character on the page could have been contributed by a difference source. While the printed page is the final statement of a set of arguments between the authors, the editors and their mutual perceptions of reality, it is static once printed. In Wikipedia, its strength and its weakness is that the argument never ends. Anything on a publicly editable page is inherently fragile and ephemeral. What is there today may not be there tomorrow and there is no guarantee that what appears sound now will be anything other than horrible and deliberately broken in a second.

The fragility doesn’t stop there, however, because we don’t actually have any part of Wikipedia inside our offices, unless you happen to be Jimmy Wales. (Hi!) Wikipedia.org, the domain name of Wikipedia, is registered in California, but the server I was connected to (for the queries I put above) was in Washington State, and there were some 17 active network devices involved in routing traffic from me (in Adelaide) to the server (in Washington) and then getting the information back. This doesn’t count the active electronic devices that I can’t see in this path and, believe me, there will be a lot of them. Now we build a lot of redundancy into the global network that we call the Internet (the network of networks of networks) but a major catastrophe on the West Coast will quickly force so much traffic onto those backup links that information flow will stop and, for some good technical reasons, it will then start to fall over.

So the underlying physical pathways that actually shunt the network information from point to point could fall over. At that point, if I had a book on the linguistics of Easter Island, I could read it by torchlight even if I had no local power. A severe power failure here or in enough places along the way, or at Wikipedia’s data centres? Suddenly, my ability to find out anything is blocked.

But let’s look at the information itself. People have been editing the Rongorongo page for over 10 years. The first version (that we can see, Wikipedia can invisibly delete revisions) is recorded for the 25th of November, 2002. Happy double digits, Rongorongo page! Since then there have been roughly 3000 edits. Are all of them the same quality? Hmm. Here are some comments:

7 April 2011, “A picture of a banana leaf is not helpful here. I looked on this banana leaf for scribblings. I know what one looks like, and if someone doesn’t, they can read about it at banana.”

12 November, 2012, “What’s wrong, Kwamikagami? It is what it is, isn’t it? Just a straight up comparison of rongorongo and Indus Valley glyphs, nothing more. I’d love to know which ones are ‘not true”‘according to you”

There are periods when this page is changing every few minutes and sometimes the data is the same for days or even months. But most people don’t know this because they never think to look in the history or talk sections. Right now, it appears that someone is disputing the authority of Kwamikagami, a person who has carried out a lot of edits on this page. This is important because if you say to someone “Hey, look at this page” then 3000 edits over 10 years says that the chances of the page changing in a day is something like 80%. The burstiness would have an impact on this but the general idea is that the simple page on a dead text(?) is more likely to change on a daily basis than not.

Does this make Wikipedia any better or any worse than the printed page? I think it makes it different because we have to treat it as an evolving discussion that we have walked in on, because of its inherent fragility and ephemeral nature.

We live in amazing times, where I can use a small hand-held device to access almost everything that our species has created. And yet, when I go to look at how robust this knowledge source is and how vulnerable we are to losing our connection to that knowledge, I am reminded that we are going to have to work out how to do this properly. If we give up the fixed physical forms (books, CDs, DVDs), then so be it, but we must make sure that we deal with this fragility before we become too seduced by the immediacy.  We have to think about this for our students too. How do we provide them with artefacts that they can consult down the line, when they need to look something up? Books have no licensing agreements, never expire and do not have to be abandoned when a digital format changes. Yet, they have none of the advantages.

I mention this because I am really looking forward to seeing how people address and solve this challenge – how can we have the best of the immediate and convenient, while having the enduring presence and guarantee of future access? Rongorongo itself is a physical artefact for which we have lost the knowledge of reading, or if it is even a text at all. It’s a reminder that we have faced this problem before and we have not solved it sufficiently well. Perhaps this time.

One Comment on “The Invisible Fragility of our World of Knowledge”