Identity: Who am I? 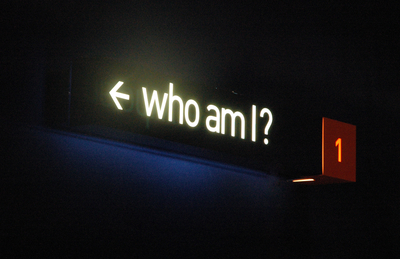 The theme of last week’s HERDSA conference was supposed to be ‘connections’ and, while we certainly discussed that a lot, the fundamental requirement for a connection is that there is something similar between two points that allows them to connect in the first place. The underpinning of all of the connections was knowing enough about yourself or your area to work out who you could or should connect with. Even where we talked about inter-disciplinary issues, we established a commonality in our desire to learn from others, a need to educate. This was a discussion of greater identity – what we were beyond the basic statements of “I am from discipline X” and an affirmation of our desire to be seen as educators.

I have some more posts to make on the final talk on HERDSA, which moved me a great deal and gave me some very interesting pathways along which to think, but today I’m going to restrict myself to musing on identity and how we establish it.

Indigenous identity is an important part of life in Australia, whether those who wish to ignore the issue like it or not. The traditional owners of the land had ways very different from those of the white colonists and the clash of cultures has caused a great deal of sorrow and loss over the years, but it has also given rise to a great many meaningful and valuable opportunities where two cultures sit down and attempt to view each other. Something I find interesting, as someone who works with knowledge, is the care and attention given to statements of who people are, within their own culture.

When the speaker, about whom I will write much more, stood up to give the final keynote of HERDSA, we had already had her identified by her people and her place in New Zealand, and she spoke in another tongue when she began speaking, as the indigenous peoples here also often do. Because she is indigenous to another land, she then apologised for her pronunciation of local words because, of course, it is not as if this is British films of the 30s and every foreigner speaks the same ‘foreign lingo’. Her identity, her cultural locale, her zone of expertise and stewardship were clearly identified before she spoke but, as she immediately acknowledged, her status and place did not grant her mystical insights into the issues of local people. I found this very respectful but, of course, I look in from outside, without a clear notion of my own identity, and therefore I cannot speak for the traditional people of the region of Tasmania which I was visiting.

When I am introduced to people, my bio says something like this: “Nick Falkner is the Associate Dean of Information Technology for the Faculty of…” and then goes on to mention my linkage to the school of Computer Science as a lecturer, and I will probably mention my PhD if it hasn’t been put into the title. Why? Because it helps people to place me in context, to value the weight of my words, to determine if the knowledge that I speak comes from a point of authority.

But is this my identity?

My PhD is not the same as an initiation into sacred knowledge. We accept that gaining the PhD is the first step along the road, and not more than that. It is at best the journeyman qualification: apprenticeship complete and trade competent but not yet a master. Journeyman comes from the French journee (day) and refers to the fact that you can charge a wage for a day’s work – you have established your value. However, with increasing pressures on the PhD completion time, tied to funding and available resources, you cannot chip away at your task of knowledge until your apprenticeship is complete, regardless of the time it takes. Now, your supervisor, in the role of master, examines your works, guides you towards crafting that can be completed in time and then stamps you ready (with the help of many others) with a possible burden to be incurred as you pick up the additional skills.

There is so much disparity in what a PhD means, by discipline, by country, even by University within a state, that it is the loosest possible description of journeyman possible. No trades body would certify an electrician under such a rubbery and relaxed definition, without reserving the right to assess their skill at the trade.

So, in my bio, when I recite my list of the symbols and people that I come from, I list one that is either highly meaningful or absolutely meaningless, depending on where it comes from. But this is the line of my academic knowledge – my descent. And, on writing this, I realise that I have no idea who the supervisors of my supervisors were. I can tell you that I was the student of Dr Andrew Wendelborn and Dr Paul Coddington but there, it stops. Of course, I realise that there are people who can, and do, trace their thesis path back to Isaac Newton but, in our culture, where knowledge is largely mutated in transmission, rather than held sacred in one form as immutable knowledge, a grand truth handed down from the ancient and unknowable entities of the past, such a descent is an accident of structure and geography.

When someone calls himself a man of a tribe, they are saying much more than “I live in this area”, they are identifying themselves as someone who is linked to a tradition and carries on the essential knowledge of the tradition. This is part of their fabric.

When I call myself an Associate Dean, a lecturer, or a Computer Scientist, I’m telling you what I do, rather than addressing my fundamental identity. Now, I’m certainly not saying that I need to move myself to a place where I only pass on immutable knowledge or that I need to start some connection with the sacred. I have no real connection to the mystic and never really have, despite some false starts. But I have always been a thinker and now I’m thinking more about why I work the way I do – mostly it’s because I don’t know how to quantify myself or assess my worth except in terms of the things that I produce, the jobs that I do, the titles that I can present when asked a question that I loathe: “what do you do?”

For me, the answer for many years has always, implicitly, been “Never enough” and, on reflection, this is the answer of a man who really doesn’t understand his own nature enough to know when he can rest, or when he is done. My apprenticeship is long over and I am becoming more and more expert every day. But before I can claim mastery, I have to have knowledge and part of that knowledge is knowledge of myself.

Calling myself Nick Falkner is a label – it says nothing about who I am. In many senses, knowing what I am is identifying those aspects to which I could apply a modifier such as ‘better’ or ‘worse’ with a real sense of being able to achieve a change. I am the only Nickolas (middle names suppressed to avoid identity theft) Falkner that there is so I am the best and worst. I seek a functional model of my identity that allows me to able to improve myself and identify when I am heading the other way.

It is, of course, possible to be a disrespectful man of a tribe, a betraying man, a gluttonous woman, an untrustworthy elder, an ungrateful child. But this says nothing about the gender as a whole, and less about actual identity, and, frankly, falling back to those accidents of birth that define physical and spatial characteristics (including the location of birth or residence) seems rather weak in terms of the  nature of identity.

Looking back through this blog, my identity becomes more clear to me but, because I am still unsure, I will probably spend some time working on this – drawing diagrams, thinking and discussing my thoughts with my wife. My partnership, my relationship, my bond with my wife is a core part of my identity but, of course, it is a shared component and describing myself in terms of this alone is like calling San Francisco “the place between the bridges”. We lose the point inside the connections.

Am I an educator? Am I a teacher? There is a subtle difference in that educators can plan and direct education, whereas teachers teach, but this is an empty sophistry for a busy century so let us establish a rough equivalence. Am I more than this? Am I a transformer? A creator?

I am leaving my journeyman days behind me. I am now on the path to mastery but the real question is, always, “Master of what?”

I look at the questions of identity that I have been posing, in reaction to HERDSA, in reaction to my increasing exposure to the nature of people and self that is now surrounding me as I learn more about the Australasian indigenous cultures. It is time to look at everything I’ve been doing and work out, behind the name and the titles and the qualifications that I have put in my biography for so long (as if they told anyone who I was), and think about who and what I actually am.

Because, of course, once I have mastery of that, then I can help other people. And, if I know anything about myself, it is that helping people is and will hopefully always be one of the best pieces of my identity.