Professor Hugh White from the ANU gave this session as the first part of a two part session.

People in the policy world think differently from you. It’s not science. Science is about finding the truth and seeking knowledge. THe business of policy is the business of making decisions – the logic towards making a decision is different from the logic of truth. (Shout out to Aristotle and his syllogisms, especially the practical syllogism that leads towards actions.) Everything you say in a policy debate should assist the policy maker in making a decision. If they think that you are asking for their money to subsidise your knowledge development, they’re probably out.

There are only three parts to a decision: finding objectives, determining means and allocating resources. How can what you know be slotted into this system? Let’s break it down into five questions:

But it’s not actually linear, it’s a complicated loop. The process is dynamic because data, costs and objectives shift. Serious policy engagement is a long-term engagement. It’s not giving a brick to a wall, it’s playing tennis. There are also lots and lots of players. A good policy maker will be working through the policy logic – so try and get to them through the media if you can, rather than directly, because politicians still read papers. If your message can attract an editor, then you’re 98% of the way to putting your message together in a way that other participants will listen to it and hear it.

You don’t have to just talk like a policy maker, you have to think like one, which can be very challenging. How do we bring our principles to bear if we’re being forced to adopt a new mode of presentation? Here are some simple guidelines.

Three last observations: when you throw your ideas to the policy debate, you lose them, they’re no longer yours. It’s not like publishing. You have to brave enough to not be afraid of criticism. Once the criticism starts, don’t respond to the critics, just their arguments.

The second part of the session (and final part of the day) was “Raising the standard of the climate ‘debate’: what ‘debate’?” presented by Professor Will Steffen. How can you become a successful communicator and academic? How do people from outside the policy world influence policy?

There hasn’t been a debate for several decades. We know the climate is being rapidly destabilised and the reason is increased greenhouse gases, this destabilisation is increasing risk across the board for our wellbeing. However you measure it, 95-100% of scientists in that field agree on this. The problem occurs when science enters the policy arena. This debate is also mostly an issue in the Anglo, English-speaking world, and is more dominant in the resource-rich and new lands (AUS, US, CAN) and much less in the UK. Professor Steffen thinks this is coming from a more divisive political system in these countries, especially when compared to consensus based approaches to solutions across the political system. Climate change is caught up in polemic in Australia at the moment.

Many people are coming to climate change from pre-existing belief systems (which is on the polemic side) whereas European (Scando) debates are far more on the analytic side. A mention was made of the lobby groups that are seeking to hold things up for powerful vested interest groups who have a strong interest in defeating any moves to combating climate change.

How do we move beyond this phoney debate?

There’s not a whole lot scientists can do about this. This isn’t in the science space anymore. There’s a false balance idea in the media that allows science to be pitted against anecdote. However, there are more fundamental points in the media, fairness, balance and professionalism, that dominate the anecdotal quotes so perhaps it’s time to remind the media of this. Let’s look at the world and ask why Australia has a problem – what do their Academies of science say? What do their other institutions say?

There’s an advantage to talking about change as a good thing, looking at what has happened to societies in the past that have failed to recognise threats to their development and wellbeing. Historically, many societies reach a high point and then collapse. It’s rare to see societies transform themselves. Those that do threaten and challenge their fundamental beliefs but this is hard to get into a policy development setting.

This session was led of by Dr Subho Banerjee, Deputy Secretary (Science, Research and Skills), Department of Industry, to take us through policy. He also looks after Science policy in the department. His move into public policy was drive by how science could contribute more to the public policy debate – and hence he is a fan of this current activity. Here comes the tour, but wait, here’s the ticket check. And it’s Wonka’s golden ticket! 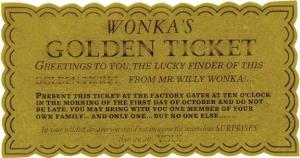 What is the policy factory? Most people look in from the outside and have no idea what goes on in the production process. Apparently, Canberra is like this, as well. I should have taken my anti-analogy pills this morning. Back to it, the policy factory takes a number of very rapidly listed elements (cabinet briefs, policy documents, ministerial decisions, etc) and turns it into a public policy, to deliver the agenda of the government of the day and improve Australian life.

What is policy? What is the idea at the heart of the policy? It needs to be explored, mulled over and tested – how it works and how it can be used to define a policy. It should be pushing forward government policy to benefit Australians. Policies are bespoke, we think about each one in a particular way to meet a particular need. But what are the elements that underly every policy process?

There are five basic principles in the simplified policy model:

All of these is designed to make the policy consistent but it’s the ideas that are going through the policy machine. How does Science fit in? It helps us to implement all of the steps and provide a good framework for it but it’s not used to make policy directly, it’s part of a conflicting set of conflicting priorities: community views, political capital, financial issues…

Science through the policy cycle, an example, based on Early Childhood Learning.

Science interacts with different parts of this process in different ways – but it’s much messier in the real world. (Boy, does this guy really like Charlie and the Chocolate Factory – and who can blame him?) Policy streams intermingle and run around, an individual could be trying to innovate into several conflicting streams at the same time. We need to realise that it’s not going to be clean and neat – any interaction with a public servant is going to be engaging with someone who is handling and juggling a multi-faceted complicated thing, which is not neatly chronological or procedural. Policy aims to provide the best possible answer to the problem, using the best available tools at that time.

It’s helpful to understand the model and the stages but everyone is working across different parts at the same time. Knowing where your input can be useful and your engagement can be most useful is really important. Policies can take months or years to form but everyone is looking to get to an end point – which is to be implemented. Many high profile policy processes have times when they move very, very quickly indeed and you then have to be ready to move. (Especially, if it’s policy from the PM’s office.) You need to also answer the question that is asked if you’re providing scientific input – what can you say based on what you know, with reasonable caveats on the limits of your knowledge.

How can you get involved? Here are two projects.

Australian Government: Department of Industry project “APS200 Project: the Place of Science in Policy Development in the Public Service (2012)”

Interesting talk, if a little heavy on the Wonka.