Well, my hosting duties are done and I’m relaxing at home, having hosted the first successful Adelaide Computing Education Conventicle! I’m absolutely exhausted and I have to jump on a plane very soon and so I crave your indulgence because today’s post is going to be a reposting of my welcoming speech to the Conventicle. My thanks to all of the guests, presenters and attendees – we started a new tradition well. I look forward to filling in the details over the next few days. Without any further ado, here is my speech:

I would first like to acknowledge that we are meeting on the traditional country of the Kaurna people of the Adelaide plains, the original inhabitants of the land upon which the University of Adelaide was built, and who have shared with us a name for this building. Ingkarni Wardli means ‘place of learning’ or, my favourite, ‘the house of inquiry’ and is the first building in the University’s history to have a Kaurna name. I recognise and respect their cultural heritage, beliefs and relationship with the land, and I acknowledge that they are of continuing importance to the Kaurna people living today.

In the spirit of today’s events, I would like to share with you the history of the name of this building, to emphasise the importance of today’s meeting – a meeting of people who are dedicated to learning, to knowledge and to sharing what they know with other people. This building had a working name of “Innova21” but a new name was always sought and, after a great deal of discussion, the then-Dean, Professor Peter Dowd, decided to seek advice on a name from the Kaurna people.

It would have been very easy to look at what we, as outsiders, know of the Kaurna language and pick a name that seemed right – especially when the word for knowledge “Ingkarni” was so close to the word “Innova”. However, the Kaurna language is protected by its custodians, because of people with less than perfect understanding or, in some extreme cases, a desire to exploit by association, so we needed to seek approval before the naming. As it turns out, calling the building “Ingkarni” by itself would have been nonsensical and would have undone the intent of the namers, which was to recognise and respect the cultural traditions of the Kaurna, in their role as educators.

If you have ever had the good fortune to hear the Kaurna Elder, Uncle Lewis O’Brien, you will know that the Kaurna placed great value on education and were respected among the neighbouring communities as educators and conference leaders. When big decisions were being made, when important knowledge had to be shared, the Kaurna were generally to be consulted and would have an instrumental role in the process. What better name for a building that contains science and education than the name “House of Enquiry” from a people who were known for their knowledge and their importance in the sharing of wisdom?

Today, we gather to discuss our knowledge of education, to share our successes and to understand and to seek to address those areas where we are yet to succeeed. I would like to thank the Australian Council of Deans of ICT’s Learning and Teaching Academy, for funding both me and Simon under the Fellows program. I would like to thank the inimitable Simon for his encouragement to run this, and to thank our other interstate guest, Dr Raymond Lister, for being here today to share his research. I would also like to thank you all for agreeing to present, or to just show up and listen. It is far easier to ignore alternative approaches to learning and teaching than it is to sit in a room and prepare to discover that you might be able to do things differently, with greater effect. I welcome you all and I hope that this is the first of a long and fruitful cycle of Conventicles. It is now my pleasure to introduce Simon!”

Thoughts from the house of enquiry.

Today we renamed the building that is at the heart of the Faculty of Engineering, Computer and Mathematical Sciences. The new name for our new eight-storey, highly efficient and environmentally sustainable building, only 18 months old, is Ingkarni Wardli. This name comes from the original custodians of the land upon which the University is built, the Kaurna people, one of the indigenous people of Australia. The name means “place of learning or enquiry” but another reading of the name is “house of enquiry“, which is my favourite. 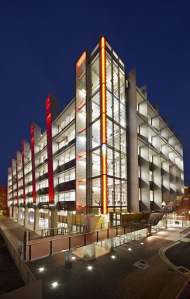 At today’s ceremony, there were the usual speeches that ones would expect at an event of this nature but the big difference for me was the sincerity and genuine recognition that accompanied the renaming. The Kaurna people are extremely pleased to have a building named in this way, and that it is this building, because they value education and enquiry and place a strong emphasis in local cultural and educational leadership. Our Executive Dean, Professor Peter Dowd, has been strongly committed to this for some time and, to do it properly, it has taken some time. (Our Vice Chancellor, Professor James McWha, has made our reconciliation week events, recognising the custodianship and contribution of the indigenous communities, a significant part of our University culture for over a decade, and has also been strongly supportive of this initiative.)

Why did it take time? Because it would have been easy to do it quickly and get it wrong. The unthinking or uninformed use of words from another language are the source of much derision on the Internet and there are even web sites devoted to it. (Don’t even ask about that unfortunate town in Europe whose name is an obscenity in English.) It would have been easy to drag together a few smatterings of language from various peoples across the region, or from the larger groups in the East of Australia, and jam this name on to the building.

Of course, it would have been a meaningless and empty gesture – potentially even insulting in its ignorance – while giving a number of people that nice warm feeling that they had used a ‘native’ name.

So it took a while. We approached the Kaurna community and quickly discovered that our original suggestion was a word that made no sense by itself – it had to be combined with another word to become a sensible phrase. Approval was sought and granted. Plans were made. Signage was changed. Today, however, the building’s name actually changed. From now on, it is Ingkarni Wardli.

I felt privileged to be a part, even in a very minor way, in today’s ceremony. The Dean’s speech emphasised the importance of the name, why we had chosen it and how it brought our cultures together. He made a point that there are many synonyms for recognition but that the two most common antonyms are ignorance and forgetfulness. By recognising the Kaurna people and asking them for a name, to work with us on providing a name, we show our awareness, our remembrance and our knowledge of their presence in the past and in the present. The representatives of the Kaurna, among them a senior Kaurna elder who gave a wonderful speech, and other peoples present clearly felt recognised, acknowledged and remembered and this cemented the importance of the ceremony. This was not a segregated event – it was all of us together, bound by our love of learning and knowledge. Seekers all, together.

I have, with some regret, seen people sniping at the name, pulling faces, making comment about how long it took, even suggesting that no-one would use the name. To them, I say, grow up. Our students learn from us (the good and the bad things we do) and we have no time for such facile and, ultimately, useless gestures. If you genuinely want to change the name, state your case, make a stand and work to change it. If not, then start using it without the eye-rolling or deliberate mis-pronunciation. Names change all the time, for far less significant reasons than this. To snipe at a name just because of the race of the people it came from? I’m sure that there’s a word for that – and it’s not one that I would ever want to see associated with someone involved in the formation of new people and the development of emerging thinkers.

There are great divides between many cultures and it is rare to be able to find a bridge that connects two disparate cultures in a way that aligns their most treasured characteristics. The naming of our new building is a bridge between the learning culture that we all value at our University and the learning culture so valued, and recognised, by the Kaurna people.

This is a good name. I look forward to using it.