← Teaching Ethics: No Shortage of Examples
Your Mission, Should You… →

The Community Lessons of In-Flight Entertainment

Now, this post isn’t just a reason to reuse that picture of the world’s most worrying looking pilot. 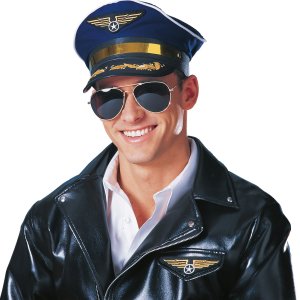 It carries on from the discussion of blended learning that I started yesterday. These days we tend to mix face-to-face, on-line and mobile learning methods in order to deal with the varied nature of students who take part in our classes. It’s partly driven by accessibility, by geography, by the market and lots of other factor. My question yesterday was ‘What will the classroom look like in 2020?’ – my concern today is what will happen to our student communities if we don’t properly manage the transition to 2020.

Let me take you back to when I was much younger, flying from the UK to Australia on a 747. Back then, planes had smoking and non-smoking sections (with no real divider, apparently the smoke just knew), and the in-flight entertainment was some dodgy music channels on stethoscope-like headphones and one (or two) films played on big screens at low resolution. This was the norm for long haul (except for the smoking) up until the mid-late 90s. (Except for Business Class, I’m told, where the advances came in much earlier)

It's always better in business, even in the '70s.

What did this heavily synchronised central resource focus mean to the planes and their passengers?

Of course, this meant that a lot of people weren’t happy but they were all in one contactable community. Lots of conversation happened before the movies, while people queued in those big groups, and, depending on when the movie stopped, after the movie. Ideal? No. Frustrating? Yes, occasionally. Isolating? No, not really.

Then, of course, we moved to individual screens in the backs of seats (for most long haul carriers across the European Singapore to UK run and the trans-Pacific run) and, initially, this allowed you choice of title, but all synchronised to a repeating loop. Now you could have some control and, if you missed something for any reason, if you waited a couple of hours you could see it again. So point 1 was a little better. Point 2 still held because the end of movie times still ran into each other and bathroom queues were huge. We were, however, all hooked into the one entertainment system and still part of the plane community.

Next we got true video on demand – you could watch what you wanted, when you wanted (even from the moment you sat in your seat until the plane pulled up, recently). Now point 1 is dealt with. You can pause films, lock out the bad channels for your kids, rewind, flick, change your mind – and the queues for the toilets are way, way down. Point 2 is dealt with. What’s weird here is the change in community. Back when movies were synchronised, stewards would know roughly where everyone was in their movies and could, if they wanted to, work around it. With movies being personalised, any contact from a steward may force you to interrupt your activity – minor point, not too bad, but a change in the role of the steward. You are, however, still on the main information distribution mechanism, which is the intercom. I can still be reached.

You know where I’m going, I imagine. Last night I jumped on a plane that was only a 2.5 hour flight. Sometimes they have seat-back VOD, and I watched Tom Cruise on the way over on that system, and sometimes they don’t. I packed my iPad with lots of legally downloaded BBC goodies and, when I discovered that the plane only had an old AV system, I watched Dr Who episodes all the way home. Isolated. So disconnected from the plane community that a steward had to tap me on the shoulder to let me know that the announcement had gone through to tell me to switch off the iPad as I hadn’t heard it.

Right now I can completely meet my own individual requirements, without using the plane’s, and because so many other people around me were doing the same thing, we never got the synchronisation going to the point that we created artificial scarcity. Only one problem – we were completely divorced from the ‘official’ distribution systems of the plane, such as the intercom announcements, seat belt signs (why look up?) and dings. Sufficiently immersed in my personalised viewing that aircraft attitude changes, which I usually notice, passed me by.

Excuse me, Sir, we need you to close the keyboard for landing.

As we develop the electronic communities of the future we have to remember that while allowing customisation and adaptation to individual needs is usually highly desirable, and that artificial restrictions, choke points and other points of failure are highly undesirable, that we have to juggle these with the requirement to be able to create a community. Lots of good research shows the value of a strong student community but, without the ability to oversee, suggest, guide and mentor that community, we end up with a separate community that may take directions that are not the ones that they should. Our challenge, as we work towards the classroom of 2020, is to work out which kinds of communities we want to build and how we construct systems around these that keep all the good things we want, while keeping educators and students connected.

2 Comments on “The Community Lessons of In-Flight Entertainment”